As you travel the foothills, keep an eye out for the many native plants found in the area. Even though historic overgrazing and wildfires have impacted the plant communities, it is still possible to find large pockets of native plants. In some areas, the natives are so abundant it is like traveling back in time, and getting a glimpse of what the rolling hills may have looked like at one time. Take some time to learn more about the natives and keep track of how many you see on your travels.

You can find further information about native and rare plants at Idaho Native Plant Society.

Taper-tip onion (Allium acuminatum) is one of the most common onions in southwest Idaho. The bright pink flowers bloom in May and June on a stalk anywhere from 8-12 inches tall. The onion bulbs are about the size of a grape and are usually 2-4 inches deep.

Aase’s onion (Allium aaseae) is a rare plant known from sandy sites in the Boise Foothills. It also grows where suitable habitat exists near Emmett, Payette, and Weiser, but nowhere else in the world! Aase’s onion displays showy pink flowers in March and April. Then it becomes dormant and is no longer visible on a site.

Arrowleaf balsamroot (Balsamorhiza sagittata) is a long-lived perennial common in the western U.S. Plants do not flower until they are 5-7 years old. The arrow-shaped leaves give the plant its name. It is a member of the sunflower family, and blooms in April and May in the Boise foothills. The leaves, seeds, and roots of this species were all consumed by indigenous people. The large tap roots were cooked in rock lined pits for up to 48 hours.

Bluebunch wheatgrass (Agropyron spicatum) was once one of the most common grasses in the foothills. Historic overgrazing, fires, and exotic plant invasion have contributed to the decline of this, and other native species, such as arrowleaf balsamroot, in the foothills landscape.

Biscuitroot (Lomatium spp.), a member of the carrot and parsley family, is also commonly referred to as “desert parsley”. Leaves of some species are very aromatic, smelling much like the popular herb. Indigenous people dried and ground the roots to make a bread-like food. There are at least 5 different species of biscuitroot in the foothills, all but one with yellow flowers. Some biscuitroot species have a strong affinity for clay soil, and can be the dominant plant on a site.

Slickspot peppergrass (Lepidium papilliferum) is one of the rarest plants in the Boise foothills. This small white flowered mustard grows only in “slickspots” where other vegetation generally does not grow. 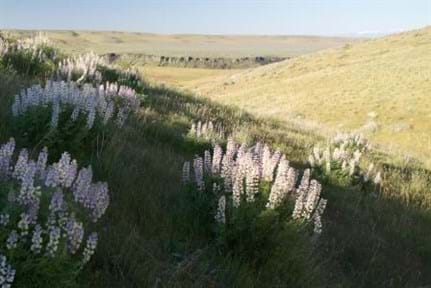 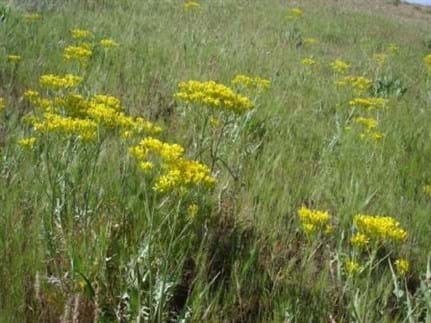 Golden currant (Ribes aureum) is a 4-6 foot tall shrub common to sheltered or slightly moist sites in the foothills. Its tubular yellow flowers bloom in March and April, and are followed in summer by orange to red-colored edible fruits that are sought after by a variety of birds and other wildlife. While golden currant gets its name from the showy flowers, it can also put on a colorful display in the fall.

Hood’s phlox (Phlox hoodii) has an affinity for well-drained sites in the foothills. This compact plant can be covered with fragrant white flowers in April and May. Other foothills species of phlox typically have pink flowers and much less compact plants.

Brodiaea (Brodiaea sp.), also known as wild hyacinth, is a tall, blue-flowered member of the lily family. Plants grow from a bulb and are dormant most of the year.

Sego, or mariposa lily (Calochortus sp.), is a common flower in the foothills. Its showy white or pink three-petaled flowers typically appear in late May or June. Sego lily grows from a deep bulb and most of the year it has no above ground growth.

The Eurasian species, Chickory (Cichorium intybus), is now widespread in North America. When most other plants have already bloomed, the blue chickory flowers are a welcome site in the foothills in the hot, dry summer. Its roots can be roasted to make a coffee like beverage.

Poison ivy (Toxicodendron radicans) is quite common in the foothills. Watch out for it in rocky sites, especially draws, riparian areas, or even under the canopy of larger shrubs and trees. Its 3-lobed leaves are distinctive, as are the white berries, when they are present. If you come in contact with poison ivy, wash with soap and water as soon as possible.

Oregon sunshine (Eriophyullum lanatum), also known as wooly sunflower, is restricted to very sandy sites in the foothills. The cheerful yellow flowers of this short-lived perennial bloom in May and June. The name “wooly” refers to the dense covering of white hairs on the leaves that help protect the plant from intense sunlight.

Woodlandstar, or prairiestar (Lithophragma bulbifera, L. parviflora), is a delicate white flower than can appear in mass in late March and April.

Scarlet gilia (Gilia aggregata) grows at higher elevations (above 4,500 feet) in the foothills. The bright red flowers are a favorite nectar source for hummingbirds. Scarlet gilia is a biennial plant. That is, plants live as a basal rosette of leaves the first year, and then die after they flower their second year

Rabbit’s foot, or Pursh’s milkvetch (Astragalus purshii), is the most common milkvetch in the foothills. The purple flowers can appear as early as March. Pods are white and hairy, and look like a small rabbit’s foot.